Brooke, Leighton and Sonya attended the RISE conference in Hong Kong—a massive conference that brings together people from all over the world to talk about tech. 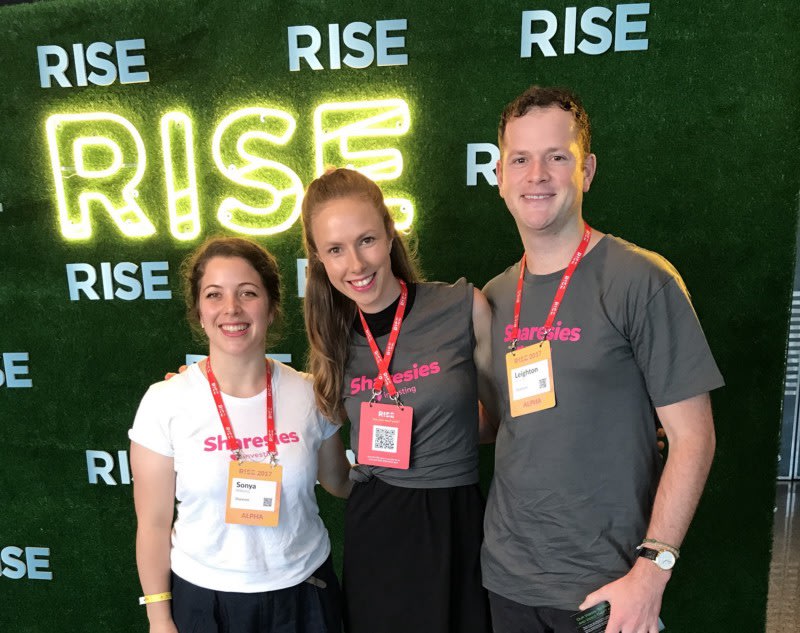 The conference attracts speakers from some of the world’s biggest companies, alongside really early stage start-ups—that’s why we were there! Sharesies was selected to exhibit as part of their ALPHA program. This meant we got to attend the conference, and exhibit Sharesies.

It was awesome to hear from tech giants like Alibaba, Stripe, and Hike. Also hear from Venture Capital firms like Melissa Guzy from Arbor Ventures, and Anna Fang from ZhenFund. There were also a range of banks and venture funds looking to hear from Startups.

There were 14,000 people from 90 countries. So we were able to chat to people from all over the world.

We were stoked to be able to give out some Sharesies socks that were custom-made by Norsewear. They were warmly received …

Massive thanks to Steve Culevski and the team at Norsewear who did such an awesome job on the socks in such a speedy timeframe.

As part of the RISE conference there was an event for female founders to pitch to a panel of investors. Sharesies was selected as one to the 10 ventures (from 70 applications) to pitch at the event run by Dock @ Work and Next Chapter.

It was great to hear from female founders from all over the world sharing their ideas and business. And was cool to see two Kiwi companies in the 10 that were chosen to pitch.

Brooke did such a great job pitching Sharesies and won the comp — which was such a massive highlight.

Shout out to the other awesome businesses that pitched, the judges, and sponsors.

Key takeouts from the conference

The RISE conference is fast paced. With three stages over three days, with each speaker being about 15 mins long.

Most of the videos from the conference are available on their YouTube channel if you’re keen to check them out.